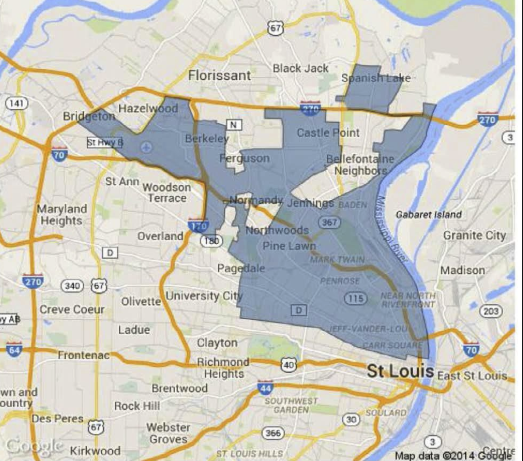 The St Louis Promise Zone is one of eight additional “Promise Zone” designations awarded by the Obama administration on April 28, 2015.  Julian Castro, federal Housing and Urban Development Secretary, attended the news conference here in St Louis and said the program could reverse “years of disinvestment” in north St Louis city and county.  The areas of the city and county that are earmarked are shown on the map below. 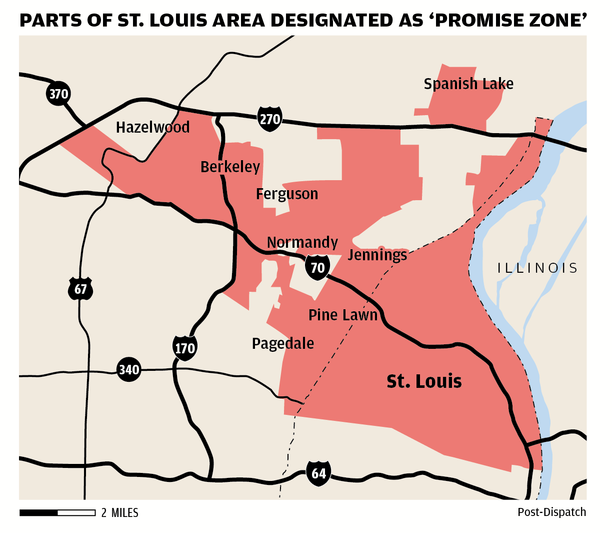 The Promise Zone is part of President Obama’s plan whereby the federal government  partners with local communities and businesses to increase economic activity, improve educational opportunities, leverage private investment, reduce violent crime and address other priorities identified by the community.  The Promise Zone was put into action in 2014.  The first recipients were San Antonio, Los Angeles, Philadelphia, Southeastern Kentucky and the Choctaw Nation of Oklahoma.

There will be a total of 20 communities named over the next 3 years. St. Louis was one of eight communities picked as a Promise Zone out of more than 120 applicants for the second round of recipients.  St. Louis and St. Louis County applied for the designation during the height of the turmoil in Ferguson.  In addition to St Louis, these 7 communities were chosen:  Camden, New Jersey; Hartford, Connecticut; Indianapolis, Indiana; Minneapolis, Minnesota; Pine Ridge Indian Reservation of the Oglala Sioux Tribe, South Dakota; South Carolina Low Country.

The Promise Zone program does not directly hand out federal money. Instead, it provides local communities technical assistance, coordinated federal staff support and preferential access to certain existing federal funding streams. Promise Zone designations have a term of ten years, according to HUD.  The plan aims to cut red tape and streamline federal funding from multiple government agencies to these specific zones. The Department of Education, the Department of Housing and Urban Development, the Commerce Department, the Health and Human Services Department, the Justice Department, and the Department for Agriculture will all participate.
All Promise Zones will receive priority access to federal investments that further their strategic plans, federal staff on the ground to help them implement their goals, and five full-time AmeriCorps VISTA members to recruit and manage volunteers and strengthen the capacity of the Promise Zone initiatives.

Here is an example of how one of last years recipients is using the designation and already showing results:
“In Philadelphia, the Juvenile Justice Center is providing career training for youth who have been involved with the justice system.  Promise Zone partners are creating access to healthy food and improving the business infrastructure for sustainable food production.  Drexel University is leading a collaborative effort to increase the number of neighborhood children who have access to high quality child care and improve school performance.  Security cameras were installed at a high-crime hot spot and businesses are being encouraged to take advantage of subsidized cameras along key Promise Zone commercial corridors.  Specific plans are being developed to preserve affordable housing to avoid displacement of long-time residents as the neighborhood improves.”Sources:  Hud.gov,  The White House fact sheet, St Louis Public Radio, CBS evening news, St Louis Post Dispatch

Please note that the information in this article is excerpts from the sources cited above.

I am so very excited about St Louis winning this award and feel that it has the potential to make a big difference towards “healing” our city and its reputation from the aftermath of Ferguson.  Maybe, just maybe, good things can happen from bad events.

What does this have to do with real estate you might ask.  It’s easy:  Thriving communities provide stability and growth to the housing market.