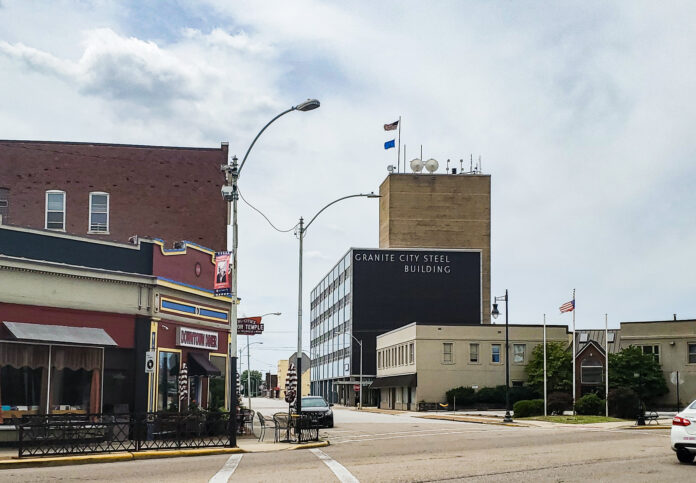 The history of St Louis Metro goes way beyond the Louisiana Purchase. It began as a settlement of Native American mound builders who lived as part of the Mississippian culture from the 9th century to the 15th century. To learn more about the rich history, join a guided hike at Cahokia Mounds on October 17, 2021. The hike is about native plants and animals and how the Mississippian culture interacted with them and the environment.

The St. Louis, MO-IL metropolitan statistical area includes the City of St. Louis; the Illinois counties of Bond, Calhoun, Clinton, Jersey, Macoupin, Madison, Monroe and St. Clair (known collectively as the Metro East); and the Missouri counties of Franklin, Jefferson, Lincoln, St Charles, St Louis (separate from and not inclusive of the city of St Louis), and Warren.

Recently my husband and I took a trip to Granite City, Illinois, which is about 20 minutes from downtown St. Louis. I had never been to Granite City and only knew of it as a once thriving town with Granite City Steel employing most of the residents of the town.

Granite City is part of the Greater St Louis Metro area. It was officially incorporated as a City within Madison County, Illinois, in 1896. William and Frederick Niedringhaus, two brothers from Germany, moved their company, Granite City Steel, across the Mississippi River to the Illinois town of Granite City. The plant prospered until the 1950s when aluminum, stainless steel, and pyrex replaced iron-based utensils. African-Americans were not allowed in the community and employees of Granite City Steel were required to live in Granite City. Granite City Steel still operates today.

The reason for my trip to Granite City was to look at the house my neighbor just bought to rehab. St Louisans don’t really talk that much about the Illinois side of Greater St Louis Metro area. My opinion is changing. We are squandering some of the assets of the St Louis Metro area.

The house my neighbor, Ernest, is rehabbing already has curb appeal. Within one month, my neighbor knows the neighbors by name and they are interacting. The block he is on is very pleasant. This is a before of the front of the house.

The kitchen is large and is on tap to be totally renovated. The kitchen door walks out to a large deck and fully fenced back yard. There is also an oversize 2 car garage with entry off the alley.

There are 2 bedrooms on the first floor. The first floor master bedroom has an en suite bathroom. The bathroom is being totally renovated, is a nice size and will have a spacious shower. The second floor also has a renovated full bath with a claw foot tub. There are two large rooms upstairs. One is a very nice sized bedroom, the other is a family room. Or in reality the entire upstairs could be a master bedroom suite or a dormitory type space for kids. It’s fun space.

Shown below are other homes in the surrounding neighborhood.

All of these homes are in the Wilson park area of Granite City. Wilson Park is sometimes called the “heart” of Granite City and is known for its nicely kept “turn of the [20th] century” homes.

The largest park in Granite City, Wilson Park comprises some 74 acres and a wide variety of recreational activities. The park also features 1 lighted softball field, 7 baseball fields, 6 lighted tennis courts, playground, including one of the largest handicap accessible playgrounds in the midwest. The Wilson Park Pool, featuring a water slide and wading pool is enjoyed by 1,000’s every year. The newly renovated ice rink is home to the Granite City High School Warrior Hockey team, dozens of youth teams and an excellent learn to skate and figure skating program. The park also features a lighted basketball court, 1.4 mile fitness trail, outdoor centennial pavilion and stage, 8 picnic shelters and much more.

With 13 beautiful parks encompassing over 175 acres of ground and several gorgeous state parks in the surrounding area, there is a lot to love for outdoor enthusiasts in Granite City.

Needless to say I was pleasantly surprised by what I found in Granite City and it is only a 20 minute commute from downtown St. Louis. It makes sense to me that these small towns on the Illinois side could be desirable options for people working in the St Louis area and should be promoted as such. I know that a lot of towns built on the river banks, and I’m thinking of Cincinnati, Ohio, to Dayton, Kentucky, are attractive assets to a Metro area.

School Rankings Play a Role in Your Property Value

A Peaceful Walk in the garden amidst Origami Exhibit

Do Churches in your community impact your quality of life