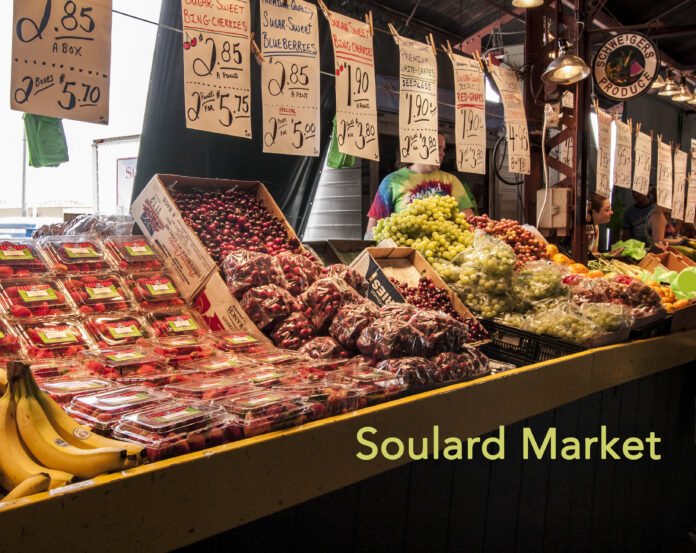 When you hear Soulard in St Louis two things come to mind:  The Soulard Farmers Market and Mardi Gras.  Actually, though, the businesses and residents find things to party about year round in Soulard.

Some Places of Interest in Soulard

The Orange Smile Soda building shown here is a landmark in the heart of Soulard.   The building was bought in 1929 by the Orange Smile Syrup Company.  In recent years it has become a condo building with preservation of the history of this landmark a primary concern in the renovation.

The Soulard Farmers Market  the last surviving public market place in St. Louis.  The marketplace was established in 1838 with the first structure built on the site in 1843.  During the Civil War the grounds of Soulard market were used as a military encampment of pro-Union guards charged with enforcing martial law.  The current building was built in 1928-29.

The Soulard Mardi Gras claims to be second only to New Orleans.  Local officials will read a proclamation declaring the start of the Mardi Gras season. Then, there will be a procession through the neighborhood, followed by a flag raising and fireworks at the corner of Seventh and Soulard.  The events continue through March 4 with the Fat Tuesday parade through downtown.  Festive – Yes!!!

Another destination in Soulard is the Anhueser Busch Brewing Co. at the corner of 12th and Lynch Street, 63118.  (Link to tour info)  In addition to the complimentary tour, they have a biergarten and gift shop.  The tour includes viewing the historic stables and buildings that are on the compound.  As an aside, when the German immigrants discovered Soulard in the 1830’s and 1840’s, they were thrilled with the underground caverns in the area.  These caverns were desirable for the brewing of German beer  because of the natural refrigeration they provided during the hot STL summers.

The Ambiance of Soulard

The ambiance of Soulard is similar to the French Quarter in New Orleans.  It is dotted with restaurants and pubs, businesses and residential homes and condos.  There is live music in many of the bars and pub crawls are popular.  The residents love the lively and festive atmosphere.  Soulard is a destination for many for dining and live entertainment and its unique shops and galleries.

The Soulard neighborhood is bounded on the north/west by Highway 55 and on the south/east by 7th/Broadway.  It is the city’s oldest remaining subdivision.  Some of the buildings in the Soulard neighborhood date back to the 19th century.  European immigrants constructed buildings from the 1830’s to the 1920’s on narrow lots as is typical in Europe.  The buildings were mostly of red brick construction.  After WWII, Soulard was hit hard by the move to the “burbs”.  It is now once again a thriving, eclectic community known for its unique architecture and blues and jazz bands.

No Chance of Going Hungry or Thirsty

Link to Restaurants and Bars in Soulard

Link to other schools in the neighborhood

I can help guide you through the process of buying or selling Soulard Real Estate.