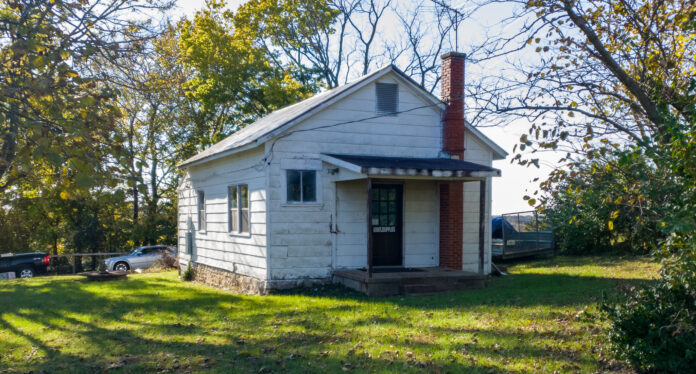 I took this snapshot recently to show my family that this home still exists. It is a memory for us. The house is really an old one-room school house but when our family was introduced to it, the home was occupied by Herman and Minerva Web. Our dad took us to this home in the mid fifties. We all had to dig deep to remember small pieces of this story. One of my cousins from the feed store filled in the piece about gathering the grain.

The house was about 2 miles from my uncle’s feed store. Herman had a job at the feed store. Every other day he would drive his pickup to the store and gather up the grain that was spilled around the storage bin. Herman raised pigs on the farmland behind his home. Accumulation of grain around the storage bin was a fire hazard. So it was a win-win for Herman to gather the grains. He could feed his hogs for free and my uncle was happy for him to do the cleaning.

Our family came to know about Herman and Minerva because my dad heard of their plight through my uncle. My dad would pack all of us kids (five at the time) into the car when he went on these missions. We NEVER got the full story of my dad’s generosity but he would share parts of the story of the people involved.

Herman and Minerva were a very old, very tiny black couple. Where we grew up black families usually stayed “in their place” and lived together in communities so it was unusual to find a black couple living amidst white folk. My dad had heard that Minerva was sick. Remember they were black. My dad searched and found a doctor nearby in Union, Missouri, named Michael Wepprich. My mom recalls that Dr. Wepprich was very young at the time. Dr. Wepprich made a house call to Herman and Minerva. My mom remembers that he found cancer so I don’t know how long she lived after we met them.

My dad also discovered that Herman and Minerva did not have birth certificates. You see, they were freed slaves. My dad was able to help them get on the social security records by taking them to the SS office. At the SS office, Herman and Minerva were tested to see how far back they could remember. This somehow determined their age. Yes indeed they were old. We are fairly certain this helped them get aid but as kids we were never told.

When I called around to ask questions of people in the area to see what they could add to this story, very few people remembered Herman and Minerva Web. No one knew the story of them being freed slaves.

I actually shed a few tears this morning while recalling this story. Herman and Minerva were mentioned often in our household so we know my dad kept in touch with them until they died and we all remember stopping by their home frequently. I thought of my dad and all the good deeds he did. I thought about Herman and Minerva and how no one except our family knew their story.

What does this have to do with buying or selling a home which is what this blog is really about? Nothing, I guess, but I think it is a poignant story about who we are as a people and how we live in our communities. Is the community important to you when you are looking for a house? If so, what is your criteria? What do you look for? As an experienced realtor, I am not sure I know the answer to this but I know it is important to me.

Are you youthful, playful or classic?

Tips for a Festive Holiday Season