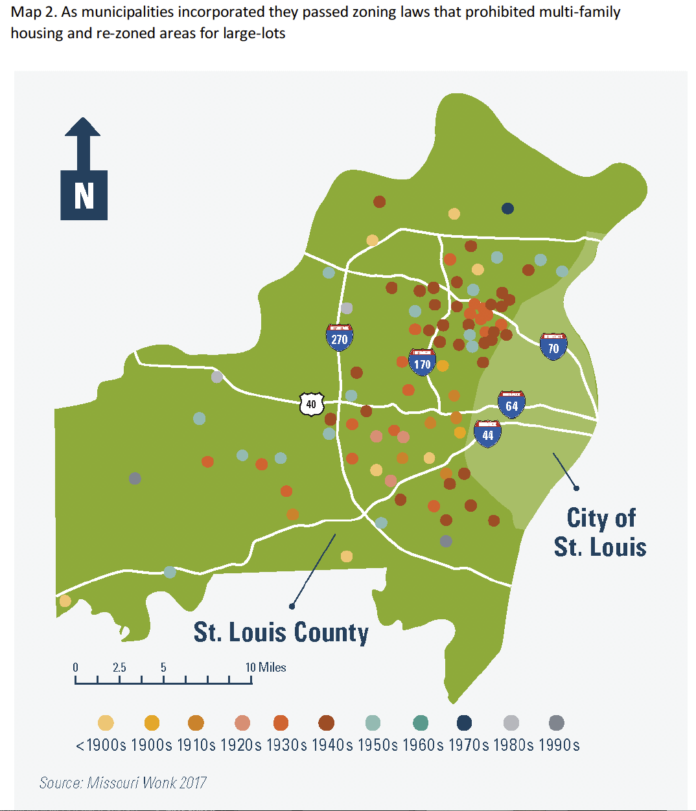 In 1937 there were at least seven small African American neighborhoods that were redlined on the Home Owner’s Loan Corporation map for St. Louis City and County (See Map 1).

As municipalities incorporated in the County, most established single family zoning, to exclude multifamily development that would attract African American renters.

In the 1950s, the St. Louis County Housing Authority built public housing to contain and segregate African Americans into unincorporated areas in the County. Beginning in the 1980s, Low Income Housing Tax Credit (LIHTC) replaced public housing units as the largest source of affordable housing. Like public housing, LIHTC units have been located in predominately Black neighborhoods with a similar pattern of segregated locations and negative site characteristics north of Olive Boulevard, as well as in previously established black areas that were redlined in1937.

The racial segregation of the LIHTC units regulated by and administered by the St. Louis County Community Development Office (STLCoCDO) now exceeds the racial segregation in public housing achieved by exclusionary zoning and other overt discrimination. As of 2017, 94% of LIHTC non-elderly units in the County were located in block groups with more than 50% black residents. (See Maps 3 and 4) This is based on HUD’s inventory of LIHTC projects located in St. Louis County as of December 12, 2019.

The overt racial segregation of public housing in the St. Louis County has been continued. The degree of segregation in the LIHTC program administered by STLCoCDO is at a scale substantially greater than the scale of the segregated public housing. There were 4355 of 4664 total LIHTC units in St. Louis County awarded in minority concentrated census tracts (and historic black enclaves)as of 2019. Low income families live in minority areas in St. Louis County because that is the only place where low income housing is placed.

There are only 321 non-elderly LIHTC units located in “opportunity areas” in St. Louis County that were not also located in 50% African American. Landlords in white areas of the County do not usually accept Housing Choice (formerly Section 8) vouchers. Since 1999, the organization, Ascend, has provided individualized counseling and support to help families realize the full potential of their Housing Choice Voucher. The organization connects families with vouchers from the City and County Housing Authorities to property owners. They help families move into majority white high opportunity areas. Since 1999, approximately 40 voucher holders they helped were able to find housing in opportunity areas in St. Louis County. Ascend has called for more affordable housing options in “opportunity areas” to allow more choice. St. Louis County’s application for HOME program financing places low priority in the location of new construction of low-income in “high opportunity areas” in the County (See Map 5).

In the five year consolidated plan (2016 to 2020) St Louis County was asked to identify the actions they would take to affirmatively further fair housing.

Listed here is a synopsis of the promises made by St Louis County to HUD in response to the question Describe any negative effects of public policies on affordable housing and residential investment found in Consolidated Plan ST. LOUIS COUNTY 2016-2020 (MA-40 Barriers to Affordable Housing – 91.410,91.210 (e))

Our assessment concludes that St Louis County did not act on their promises or solutions. We’ve identified additional impediments and solutions that we feel should be adopted by St Louis County in addition to the promises already made by them.

7. StLCo response & promise, not kept Create “ Voucher Counseling Centers where voucher recipients could be assisted in locating housing units in locations that might not be concentrated in high poverty areas”.

1. StLCo response & promise, not kept “… education and awareness of the value of diversity and integration is especially important”

2. StLCo response & promise, not kept support and work with organizations (such as InvestSTL) dedicated to promoting diversity throughout metro St. Louis and St. Louis County.

StLCo response & promise, not kept “For residential developments competing for public funding, those that offer universal design, or that otherwise exceed FHA minimum accessibility requirements (either in number of accessible units provided and/or in the design of these units) should be prioritized”.

StLCo response & promise, not kept “Publicly praise or otherwise recognize financial institutions with a record of supporting fair housing initiatives. For County and City financial business, give banks that have not supported fair housing goals a low priority.“

StLCo response & promise, not kept “… more outreach and training is needed to educate rental property owners and managers on the requirements of the Fair Housing Act, the definitions of protected classes, discriminatory practices, and potential consequences for noncompliance.”

Tips for buying in an inclusive neighborhood.

This article was originally posted in www.withaction.org and authored by Barb Heise and Rosalind Williams