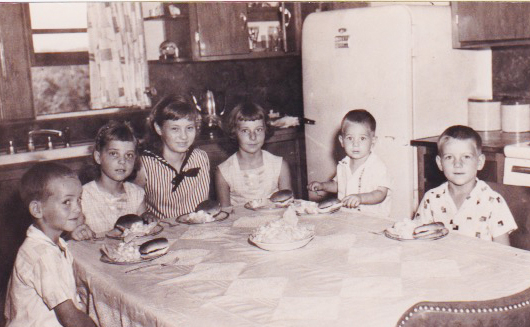 My siblings and I grew up in rural Missouri. There were six kids plus my mom and dad. We
lived in a TRUE community with the Hub being the Catholic church. When I tell you that
everyone knew everyone I really mean it.

We had what was called a” party” telephone line. There were 8 families on the line. When a call came in, the phone rang in all eight homes. Our code was 2 long rings and 2 short rings.The accepted practice in the community was to do what was called PlKING. This consisted of silently picking up the phone to listen to your neighbors conversation without them knowing. Nothing was private.

My father was one of the leaders in the community. Almost everyone was a farmer and, at that time, not very wealthy. When I was around 60 years old we had a grade school reunion. We were all sitting in a circle, similar to around a campfire when one of my best friends told our group of her fondness of my father. Her dad had polio and was confined to a wheelchair. The family income was from the farm they lived on. They were a young family of 3 daughters. It was unusual at that time for women to work the farm except for gardens and chickens. This family was dirt poor. In addition to not having food on their table every day, the family didn’t have a car. My friend told us at that reunion that my dad brought groceries to them once a month.

Needless to say my dad never talked about this on the “party” line and made sure none of the neighbors knew of it so that the family wouldn’t be shamed. My family didn’t know either.

With this kind of example, it is easy to understand that Community is the most important aspect of my quest for quality of life.

Having lived in St Louis now for more than 40 years, I am feeling like the responses of white families cited in Dismantling the Divide published in the St Louis American

when asked how they felt about St Louis: “ isolating, embarrassing, depressing, overwhelming. I feel guilty. I’ve become numb. This level of segregation has begun to seem normal.” When my friends and clients ask to look in inclusionary neighborhoods I am at a loss.

I don’t want to move out of the area but I want to stand up for change. I have formed a non-profit group called WITHaction. Our purpose is to ensure that lower income residents have access to high-opportunity neighborhoods. WITH Action believes inclusionary neighborhoods produce a synergistic effect between housing and school integration, providing both children and adults with superior opportunities. Our current action is to bring pressure on the county to Reverse the current priority level for HOME project target areas to incentivize new affordable housing construction in “opportunities areas”.

My goal is to be proud of my community and be excited about helping my friends and clients find the quality of life that we all deserve in a wonderful city.

Breaking down the Delmar Divide