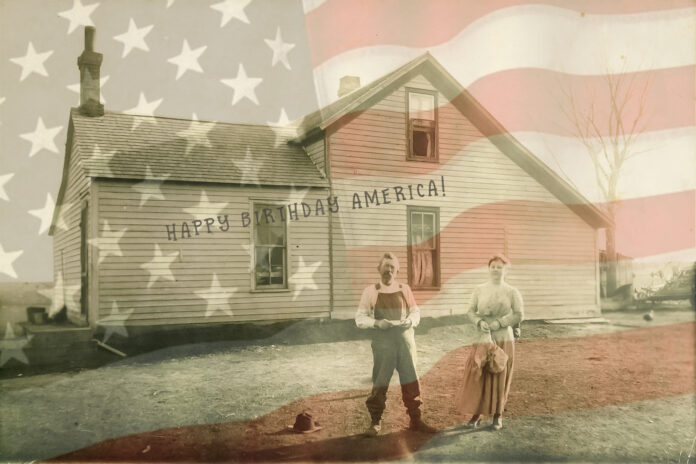 This picture was taken on my grandma’s, Mary Lienert Kimminau, family farm circa 1915. My grandma and her dad were working in the garden. A roving photographer came by and asked to take a picture of Mary and her father, Paul Lienert. He wanted to take a picture of them and the house. It may even be a Solomon Butcher photo.

My great grandparents, Paul Lienert (in the photo) and his wife Sophia, are listed as arriving passengers on November 19, 1880, in New York, New York (either Castle Garden or Ellis Island). Both Sophia and Paul were born in Bohlsbach, Germany. According to legend, Paul had just come home from seven years in the German army, then married his childhood sweetheart. Soon after marriage he was summoned back to the army. Friends and family scratched together enough money to sneak them out of the village after dark to make it to the new world. Upon arrival they moved to live with friends in St Genevieve, Missouri. They moved to a farm in Nebraska in the summer of 1881.

From ellis island to the nebraska plains

Mary Lienert (in the photo) married Ferdinand Kimminau on February 10, 1920. Even though it isn’t mentioned in the historic timeline of the 1918 Flu Pandemic, my grandparents could not have a public wedding because of the lockdown for the flu. My grandparents bought a farm early in their marriage and started their family. The drought started in 1931 which led to the Dust Bowl. No crops. No crops. No crops. The worst storm occurred on April 14, 1935. My mom recalls that many times when they walked out their door, the dust, like a snow blizzard, was in drifts as high as their second story windows.

Stand beside her and guide her

After the crops failed for several consecutive years, my grandparents left Nebraska for Missouri. My grandfather, Ferd, read an ad of a farm for rent in Union, Missouri. The ad was in the Sunday Visitor which was a Catholic newspaper. Their cousin had a truck and he moved them. My grandfather loved quarter horses so they were on the truck. They had sold a lot of their furniture but the horses took precedence so they had a lot of the furniture piled on top of the truck. My mom recalls that one of the chairs fell off and the driver just kept on going forward. The farm was salty and rocky. Nothing grew so Ferd took a job. The family of eight children and Ferd and Mary stayed in Franklin County in Missouri to this day.

It’s the hammer of justice, it’s the bell of freedom, it’s the song about a love between my brothers and my sisters all over this land. happy birthday america! we love you!

Do you have a view from the top