The current owners of 7447 Cromwell Drive are all about energy efficiency. It’s very comfortable to walk through the home. Every room, from the third floor to the finished lower level is toasty in the winter and cool in the summer months.

7447 Cromwell Drive is a traditional home built in 1927.  It has many of the original features with updates that kept the early twentieth century aura with the comforts of the 21st century.  Mrs Owner loves, for example, the Inglenook fireplace which is one of the features of the living room.  I must admit I had to look it up.  Just fyi,  it literally means chimney corner and originated in the mid-late 1600’s.  Originally an inglenook fireplace was in the home with the hearth being the area for cooking and the enclosing alcove around the inglenook was where people gathered for warmth.  It is designed as a cozy recessed area with seating.  It makes it a little more special to read the history:  Things that inspire; Camelot Fire; This Old House. 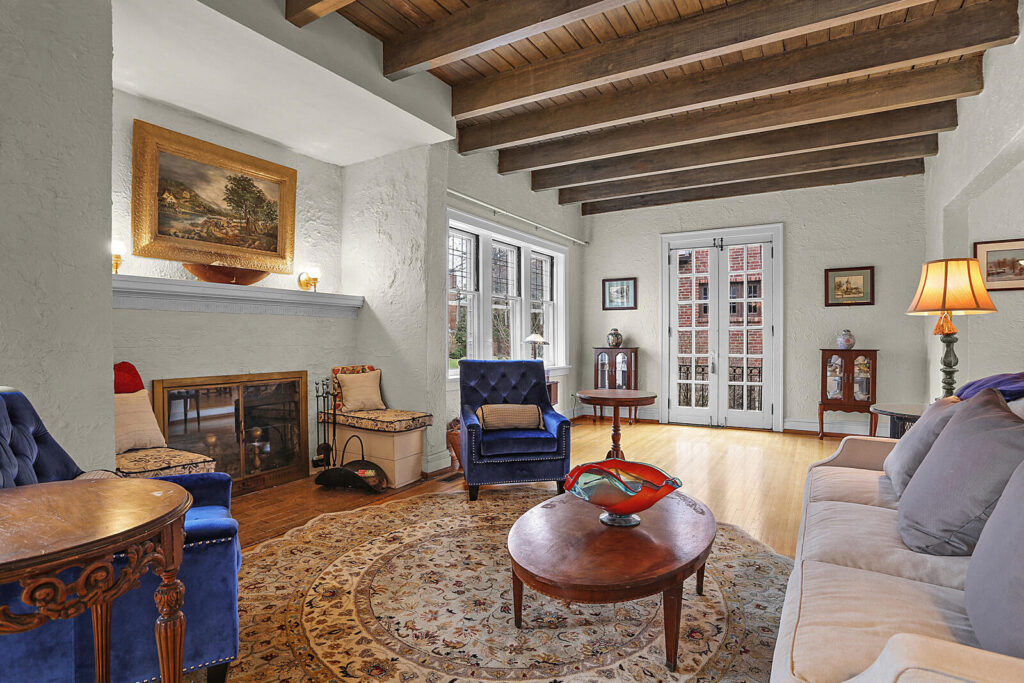 The fireplace is wood burning and lined.  While you are in this room, you may want to take a look at the natural ash beamed ceiling, the french doors and the original leaded glass windows.

The dining room also has leaded glass windows.  It opens up to a new 15×12 deck with a pergola that is covered with mature native Norton grape vines.  The Norton grape can be another conversation starter at your first dinner party and/or become a new hobby.  The deck leads to a patio and fire pit.  The yard is fenced.  The perimeter is planted with hydrangeas, crepe myrtle, southern magnolia and a tulip tree.

Next is the multi-cook kitchen.  The current family likes to cook and they envisioned a lot of action happening in this room.  They wanted each person to have their own space so they set it up with two separate sinks and also a built in breakfast bar or work area.  The room has natural northern light.  The dishwasher and five burner stove are AGA.  The burners are gas, the oven is electric.  The counters are an active quartzite.  The back splash is glass subway tile.  The stove has a pasta faucet to add another little luxury.

In addition to the book A Pattern Language by Christopher Alexander and others, my friend/client Sharon Perry gave me so many lessons in looking at the real pleasures of living in a home.  One of the first things she would look at was where she would have her morning coffee.  The essential was having natural eastern light.  Well, 7447 Cromwell now has the perfect spot.  The current owners transformed the porch into a room off the kitchen.  Check out the natural sunlight in this room – a wall of windows with eastern light.  Oh, there is also a wall of northern light too.  What a place to soak up some rays while reading the morning paper with a cup of coffee.  Oops that may be outdated, the newspaper I mean.

The three original bathrooms have been updated.

The second floor has 2 bedrooms with the possibility of turning the study that is part of the Master Bedroom Suite back into a bedroom.  The third floor was the youngest daughter’s mecca.  It hosted quite a few preteens and teens.  She especially loved the window alcove and could be found there reading a book quite often.  It has recently been turned into an office for Mr. Owner and a family room.  It has been insulated to R-40 and new thermal windows have been installed.

The basement could be, and actually has been, an apartment for extended family.  It has recently been refurbished and insulated to an R-15 factor.  It has an exterior door separate entrance and an egress window.  The floor is floating and water and mold proof.  The bathroom has a separate curb-less shower and a Spectrum Infra Red sauna.  There is some storage, a wine closet and a laundry room on this level. 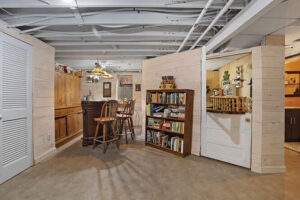 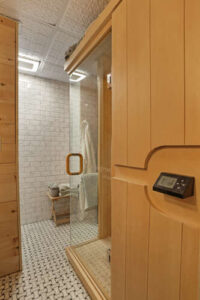 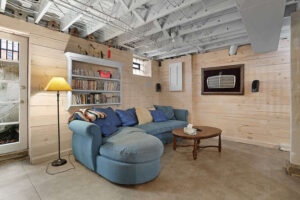 The current owners installed a geothermal heating cooling system. It is a zoned system (first floor and LL and then 2nd and 3rd floor.) The system is forced air. The geothermal heat pumps provide energy until the outside temperature hits 32 degrees at which time it automatically switches to the gas forced air furnaces. The geothermal energy is also the source of fuel for the hot water heater. The highest gas bill for the last 12 months was $107 in January of 2020. The low gas bill was $36 in August of 2020.  Oops, this winter took it’s toll on heating bills.  February 2021 was $242.22.  The last 12 months totaled $762.79 keeping the monthly average at $64/month.  The gas bill The average monthly electric bill was $171 for the last year (both owners worked from home).

The home has updated plumbing and 200 AMP underground electric service.

7447 Cromwell Drive is located in the municipality of Clayton MO. Clayton is an inner-ring city at the western edge of the city limits of the City of St Louis. It is in the central corridor. It is also the county seat of St Louis County.

Niche has rated Clayton as the number 2 best place to live in Missouri. This ranking takes into account key factors of a location including the quality of local schools, crime rates, housing trends, employment statistics and access to amenities.

Clayton has over 80 restaurants and over 200 retail shops. The Galleria Shopping Center is in the neighboring town of Richmond Heights. The Delmar Loop is in the neighboring city of University City. The city of Clayton has many special events but many are hold now until the pandemic is stabilized. One of the most popular Clayton events is the Clayton Art Fair. It is scheduled for the weekend of September 10th through 12th in 2021. It is a gathering of very creative craftsman from across the country and well worth a visit.

At the northern edge of The Moorlands is a small covey of local shops including a coffee shop and Protzel’s Delicatessen (one of the best remaining kosher deli’s in St Louis). To the south and west is The Galleria shopping center (1.2 miles). On the route to The Galleria are more local shops including the Kitchen Conservatory, a fabulous place to take cooking lessons and buy quality items for your cooking needs.

The walkscore for 7447 Cromwell Drive is somewhat confusing to me. Walkscore ranks it as 46 (car dependent). It is certainly walkable to the Clayton Business District. There is a bus line a couple of blocks away and the metrolink is .8 miles away.

Claytonites have the advantage of their own Shaw Park on the western edge of the city and Forest Park on the eastern edge. Both are magnificent parks.

My images of Clayton always include the Shaw Park Aquatic Center. I would change my route to make sure to pass the pool and diving pool during the summer months. I would pray for the red stop light while in front of the diving pool so I could see at least one diver. The lap pool was always filled with sunbathers. The other “people watching” favorite was watching the kids hanging out and walking home with their friends. Shaw Park is more than the Aquatic Center. It is 47 acres of grounds which includes tennis courts, picnic grounds and walking trails.

Clayton has several other smaller parks amidst the different neighborhoods including a dog park.

Wydown Middle School has 670 students in grades 6-8 with a student-teacher ratio of 11 to 1. According to state test scores, 71% of students are at least proficient in math and 73% in reading. Students at this school are making far more academic progress from one grade to the next compared to students at other schools in the state. Wydown Middle School was ranked #2 in best middle schools in Misshouri by Niche.

Clayton High School has 900 students in grades 9-12 with a student-teacher ratio of 12 to 1. According to state test scores, 78% of students are at least proficient in math and 80% in reading. SchoolDigger ranks Clayton High 5th of 460 Missouri public high schools and the Clayton School District as 3rd of 485 Missouri school districts. Clayton High School was ranked #2 in St Louis High Schools by US News.