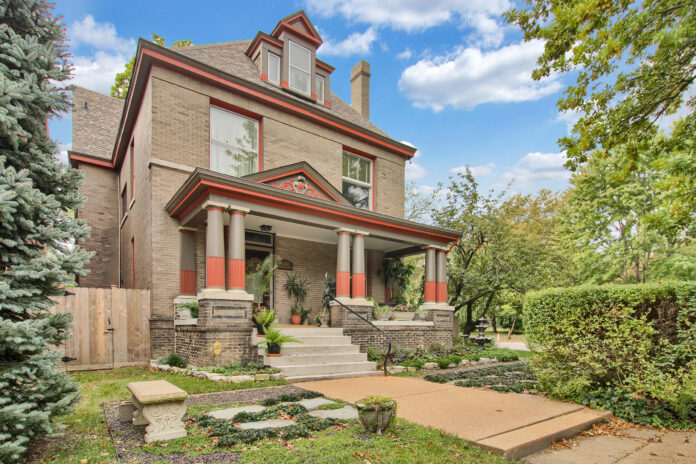 Holidays in this house are what the romantics love.  3258 Copelin Avenue sits at the end of Compton Hill Place.  It is on a dead-end street of only 3 homes.  Immediately across the street to the west is Compton Hill Reservoir Park with tennis courts and a playground and an awesome view of the Gateway Arch.

This two and a half story house is well preserved for its age.  Much of the natural quarter-sawn and quarter-panel golden oak is still untouched by paint.  The seven fireplaces are non-functional but each one has an ornate mantel.  I think I vote for the one in the family room as the best but the entry mantel is in strong contention.  The family room has southern and western light with a view of the 100 year old Catalpa tree and the green space of the park.The kitchen is a traditional kitchen with trendy amenities.  It is on the southern side of the home and opens up to a sunroom with sliding glass doors that connects the outdoors to the indoors.  The sunroom could be a little breakfast area or used as it is currently as a passway to the tiered decks in the backyard. 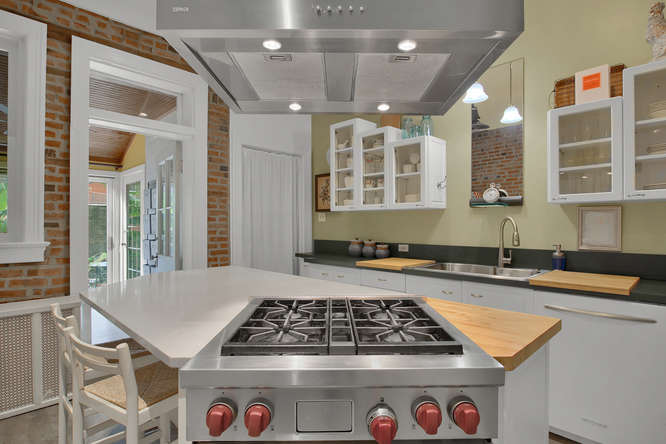 Another idea for the sun room is to incorporate it into the kitchen by removing the wall separating it from the kitchen.  Blending these spaces creates a larger working area and additional livable space.  It also brings the outdoors in adding another dimension to entertainment possibilities.  Click here for more creative ideas.

Oops, I got distracted.  We were talking about the kitchen.  It is set up for cooking.  The large center island has a butcher block section and a quartz area that are ideal for food preparation.   Other features of this kitchen include a Wolf gas stove, an exposed brick wall and a 6×5 walk-in pantry. 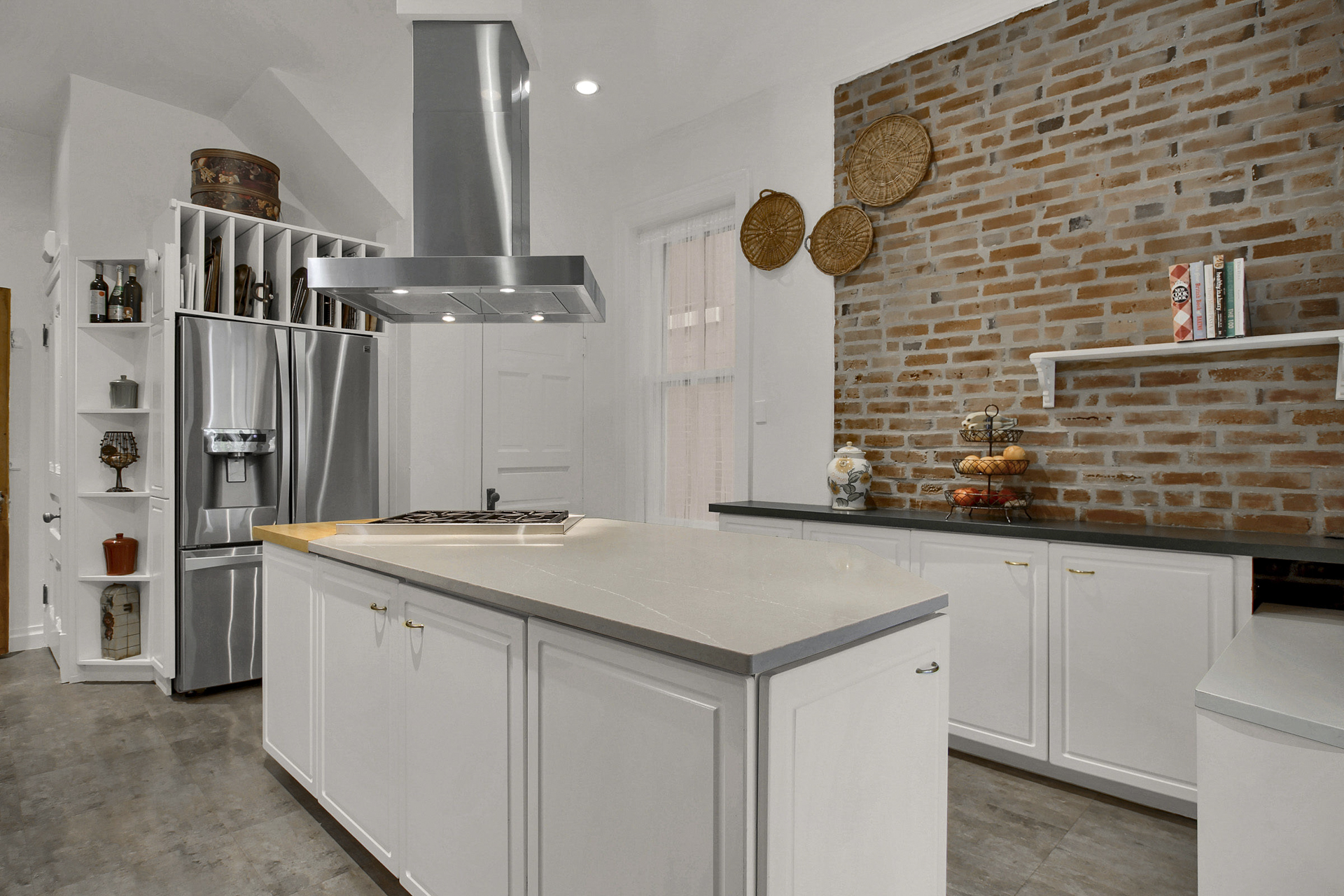 So just to recap about the first floor: a living room, a dining room, a family room, a 25×12 entry, a bay window and a curved door, four fireplaces, a stained glass window, four pocket doors (working), a kitchen, a sunroom and a powder room.  Are any of these on your dream list?  As an fyi, one of the pocket doors is a solid wood 6 foot door – quite unique.  Pictured below are the entry and the bay window and curved door which are part of the turret that ends on the third floor as a play area .

Now for the second floor with its master bedroom suite that has pretty much everything you would dream about.  First of all, it also has southern exposure with a view of the backyard and the park.  The organized 16×11 closet is the envy of every owner of an older home.  So then what tops that in a master suite.  Well, the master bath might.  Check it out:  heated floors and towel rack, soaking tub with jets, a walk-in shower with luxury shower system and multiple shower heads. 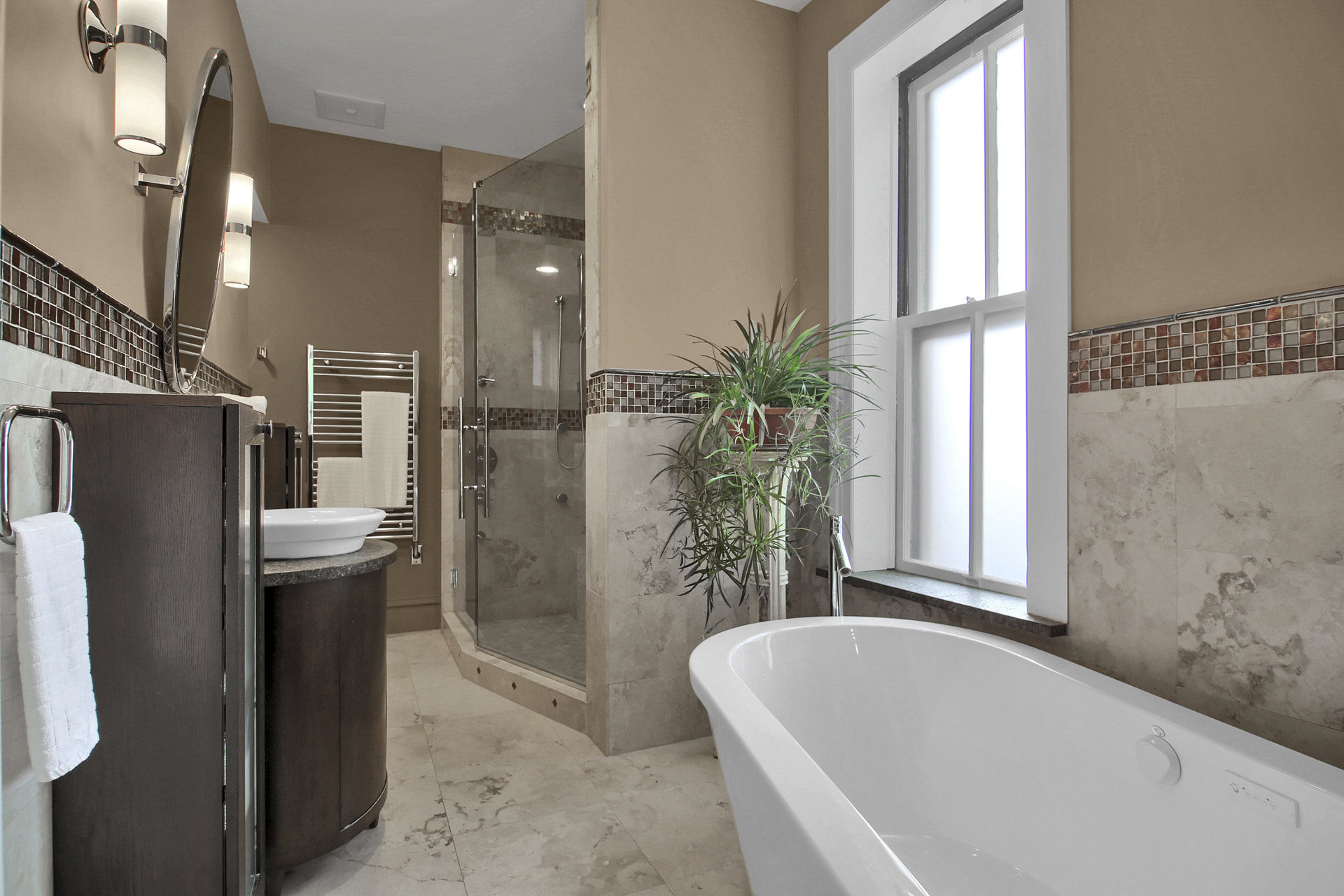 There are 2 more rooms on the 2nd floor.  A large bedroom with a window seat and a den.  This light fixture is one of two in the home.  The one in the living room was original to the house. The fixture in this upstairs bedroom was installed in the twenties.  They are the precursor of ceiling fans and both work.  There is also another full bath on the second floor.And now to the third floor which the current owners call Gracie-land (because Gracie lives there).  Every young girls dream.  This floor has another full bath and a guest bedroom.  Then there is the 26×14 bedroom with an adjoining playroom/retreat.  If you are looking for a teenager’s mecca, you are here.

Chatting a bit about outdoor features of the home.  Well, it’s right next to Compton Hill Reservoir Park for green space, a children’s playground and tennis courts.  The backyard has a 100 year old tree and tiered decks for partying outdoors.  The landscaping is mature and sort of puts you in mind of an English garden.  There is a one car garage.

Not to forget the mechanics, there is zoned air conditioning and radiant heat.  The roof is about three years old.  The tankless hot water heater gives you instant hot water.  There are two 200 amp electric boxes and the whole house was re-wired around 1989.

The neighborhood is called Compton Hill Reservoir Square.  There is a lot of neighborly interaction.  They hold monthly meetings.  There are 124 homes in the subdivision.  The membership is $30/year and it is optional.  They have an Octoberfest event held at the Magic Chef Mansion on Russell.  There is also a neighborhood Christmas party.

Many of the residents in the neighborhood are members of The Water Tower & Park Preservation Society.  Currently the Society is working on a long-term master plan that will recreate the historical landscape design of the park, restore its original ponds and fountains, develop space allocated for large gatherings renovate the historic landscape, restore the park’s public restrooms and amend the park’s accessibility.  They conduct tours on of the water tour on full moon nights and the first Saturday of every month.

A large attraction of this neighborhood is the Compton Hill Reservoir Park, a 36-acre public park.  Located on one of the highest elevations within the city, the park surrounds a 28-million-US-gallon reservoir used to provide water for many of the city’s residents.  (According to the owners it is the BEST place to watch fireworks.) The water tower is one of three historic water towers in St Louis and one of seven remaining historic water towers in the United States. 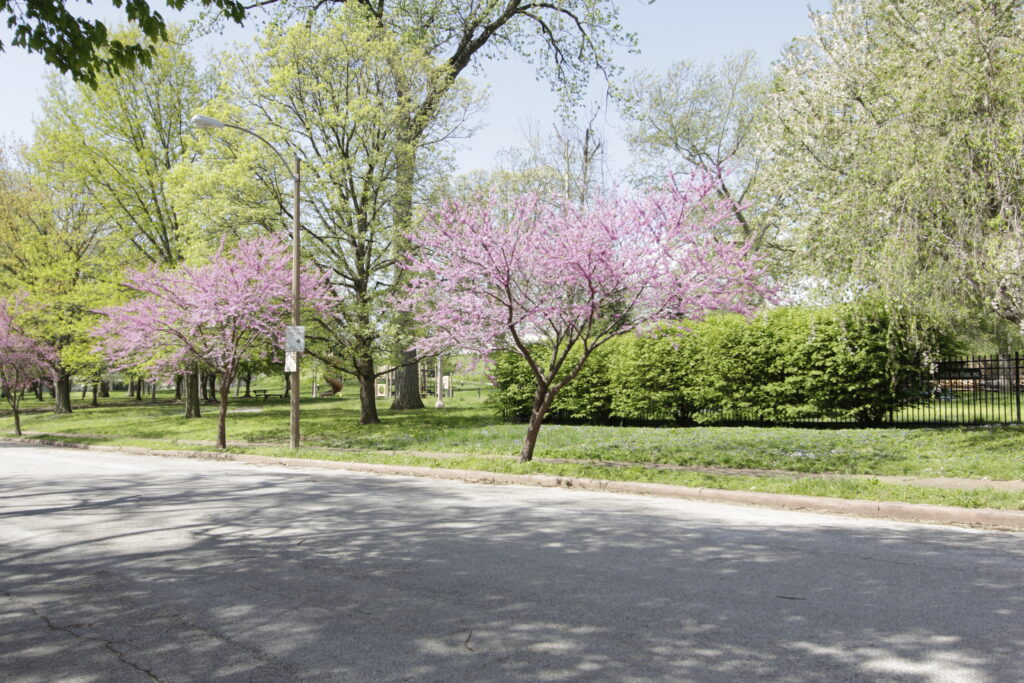 The park is immediately adjacent to 3258 Copelin Avenue.  In addition to a playground, it has a pavillion and tennis courts.  Of course it also has the water tower, the Naked Truth statue and a fountain.
Other news for the neighborhood is the new SSM Health-St Louis University Hospital scheduled to open in 2020.  The new facility is a 10 floor, 600,000 square-foot hospital with 316 private rooms.  The total cost for the new medical center is $550,000,000.

This location is just one block east of “Grand South Grand”.  With the exception of the Delmar Loop, the heart of South Grand is the most visited street in St Louis.  There are shops, Tower Grove Park, and a plethora of ethnic restaurants.

The Missouri Botanical Garden is within walking distance but energy is required.

Each neighborhood in the city is serviced by one or more traditional public schools covering Kindergarten to 12th grade, operated by the St. Louis Public Schools (SLPS) district, supported by local, state and national tax dollars. Your child is assigned a school based on your address. Like all public schools, these are tuition-free and follow curriculum and evaluation guidelines established by the state of Missouri.  3258 Copelin Ave is assigned to the  Shenandoah Elementary School, Fanning Middle Community Ed and Roosevelt High School.

There are 36 charter schools in St Louis which are also tuition-free schools but not a part of the SLPS.  To learn more about charter schools go to: Charter School 101: The Basics.

This 2019 Best Public Schools in Compton Heights gives some additional information to make searching for the right school a little easier.  This guide from SLPS is also helpful in making the all important decision of schools and neighborhoods.